Think back to when you were 23 years old – how each day at work felt, the day-to-day tasks for which you were responsible. Now imagine an alternate reality: Instead of that job, you’re on a military outpost in southern Afghanistan, responsible for leading a platoon of 25 soldiers in a combat zone. Easy enough? Now you’re tasked with separating from your larger unit and moving to a completely new area under a separate unit in a different part of the country. Your unit completes this transition skillfully, starts to settle into the new space for a couple weeks, and then you are told to move your platoon again to a new unit. This new unit is from a different nation, and the primary language is not English. You will have to embed with this new team to learn about the area in which they operate. Welcome to the life of a leader dealing with constant change.

We can learn a lot about leadership from the armed forces, whose members are called upon daily to demonstrate adaptability, bravery and perseverance. In a speech to cadets at the U.S. Military Academy in 2016, Harvard President Drew Faust noted that “a leader inspires others to do what they might not otherwise do.” This is a perfect definition of change management. There’s a common thread in any successful change management initiative -- committed leaders who support and coach their team members throughout the process. By nature, most people are resistant to change because it’s a disruption to the comfort of their lives, but great leaders can transform the collective potential of teams by consistently following a few key principles borrowed from the military.

Dwight D. Eisenhower once famously said, “In preparing for battle I have always found that plans are useless, but planning is indispensable.” In the military, plans are an art form. Twenty-page documents lay out in intricate detail the timing and movement of each unit. In the end, however, it all comes down to two pieces, less than half a page when combined, that are needed to accomplish any mission: A Mission Statement and the Commander’s Intent.

The Mission Statement is like the one sentence version of a civilian change management proposal. A single statement outlines the 5 Ws (who, what, when, where, why) of the plan:

The Customer Operations team (who) in Portland (where) is going to migrate onto a new CRM platform (what) by the 25th of July (when) to better track and respond to email contacts from all customers (why).

When team members know what they need to do and why they have been asked to do it, their tasks and responsibilities become obvious. Taking just fifteen minutes to develop a statement can create clarity for the whole group.

The U.S. Army defines Commander’s Intent as a statement that “succinctly describes what constitutes success for the operation. It includes the operation’s purpose, key tasks, and the conditions that define the end state.” A clear vision of success focuses everyone on the same goal.

The business world operates with similar constructs. Simon Sinek, the motivational speaker and bestselling author of “Start with Why” and “Leaders Eat Last,” encourages high performing organizations to build a “golden circle” of WHAT, HOW and WHY for their teams. 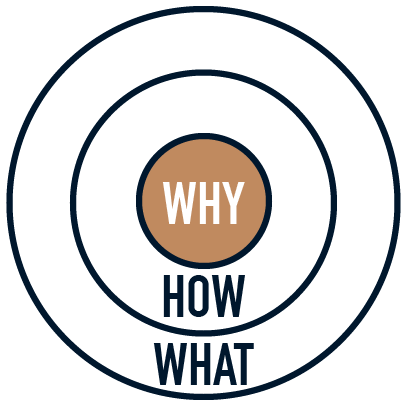 Organizations usually know WHAT they do because it’s the focus of their day: Whether it’s selling cars or winning championships, these tasks should be outlined in a mission statement. They have also developed a unique way of HOW they accomplish these tasks that sets them apart from the competition. The WHY is at the center of the circle; everything revolves around it. Strong organizations are made up of people who are excited to be working towards that common purpose.

Leaders are responsible for defining purpose and communicating it to their teams, especially during periods of transition. When members of a team know, understand and believe in the purpose laid out for organizational change, they are more likely to shift from passive participants to active advocates. Once they become advocates for change, they will feel empowered to implement it.

Empower Your Team Through Your Actions: The One-third, Two-thirds Rule

Simply wanting to empower a team isn’t enough to make it happen. The military follows a simple rule to encourage empowerment in the planning process: the “One-third, Two-thirds Rule.” The rule is simple: When undertaking a task that involves others, consider the total time available for completion. The leader is given one-third of the time to plan and brief the team. The unit then has the remaining time to plan and execute.

For example, if a company is tasked with bringing medical aid to a village in 12 hours, the leadership team should complete and share its plan within four (one third). The platoons have eight hours (two thirds) to get ready on their own. The key takeaway is to minimize time spent on a simple plan (the WHAT and the WHY), and then let the actors figure out HOW to accomplish it. Transparency is paramount, because teams need to be informed to succeed. As retired General Stanley McChrystal, who was top Commander of American forces in Afghanistan, explained: “The fact that I know something has zero value if I’m not the person who can actually make something better because of it.” Transparency that fosters open communication also leads to more cohesive teams. The One-third, Two-thirds Rule helps everyone succeed. We’ve all been a part of organizations that regularly change the requirements for deliverables, adjust templates or request information at the last minute.

Instead of changing the plan, organizations should have trust and give their teams the freedom to develop their own plans. They may identify and solve problems no one even realized existed. Some leaders fear that empowering teams means they will be relinquishing control. In reality, they’re allowing their teams to grow by taking on responsibility for their own work. Team leaders should work to inspire them to achieve what they did not believe possible.

The Medal of Honor is given to soldiers who exhibit “conspicuous gallantry and intrepidity at the risk of life above and beyond the call of duty.” This level of heroics is rarely required in civilian life, but the Medal of Honor can teach us about how to lead – and guide change.

A foundation of trust strengthens any team. When all members of a team are willing to sacrifice for the greater good, a communal and supportive environment is created. The Non-Commissioned Officer (NCO) Corps, known as the “backbone of the Army,” places particular importance on this sense of solidarity. NCOs are experienced women and men with individual specialties, and they’re dedicated to supporting the Soldiers around them. Their creed includes the following phrase: “I know my Soldiers and I will always place their needs above my own. I will communicate consistently with my Soldiers and never leave them uninformed.” The servant leader values trust and transparency.

Just as NCOs are responsible for caring for members of our military, all leaders must care for their team members. A leader’s dedication and compassion for the team cannot be limited to times of change. The leader’s role is to facilitate the team’s professional growth each and every day. Leaders who are willing to give time and effort to help the group succeed will earn a similar commitment from those they lead.

Establish trust in times of change and uncertainty. Work together to understand WHAT changes to implement, HOW they will be accomplished and WHY they are needed. This foundation of trust will ensure smoother, simpler and faster transitions, whether in the boardroom or in the field.

Josh Jones is a Propeller alumnus with a deeply ingrained commitment to servant leadership that took root during his five years of service in the U.S. Army. His philosophy, which continued to bear fruit when he transitioned to civilian life, is centered on the belief that serving first -- ensuring that the needs of people around him are being met – will deliver the greatest results. He takes great pride in making processes, programs and operations more efficient to help individuals and organizations perform to their highest potential.

Tagged with: people and change